the post below is written by Darvinder Kochhar, a talented freelancer in New York City who helped Fomo evaluate our user onboarding experience. we're grateful for Darvinder's work, and i hope you enjoy reviewing his insights. -Ryan, founder 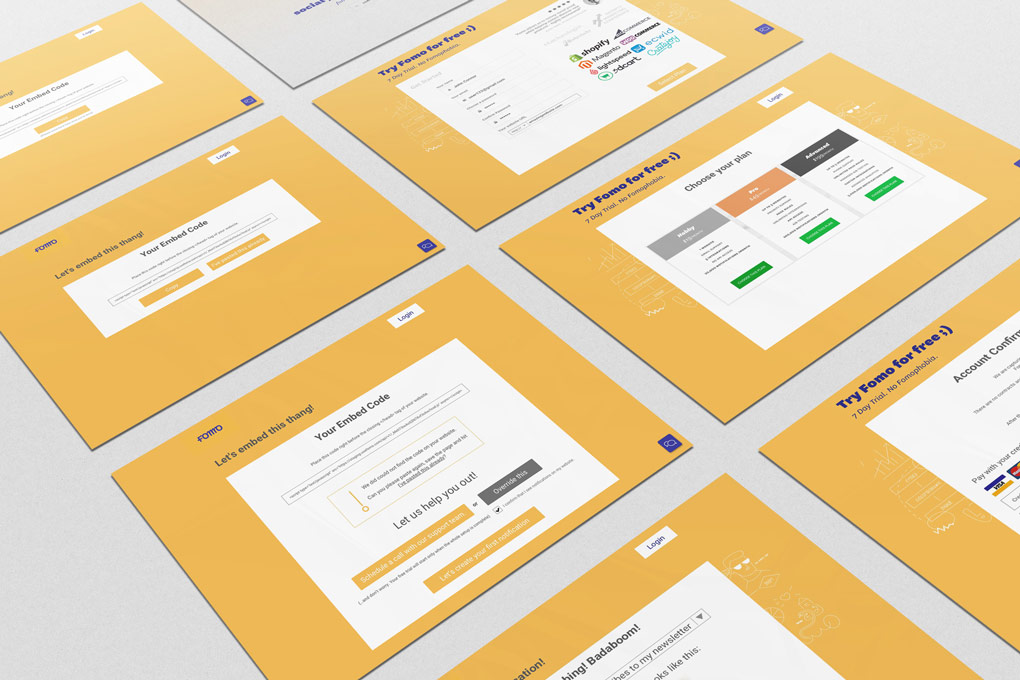 Fomo is a SaaS platform which helps eCommerce platforms improve their conversion rates by using the concept of Fear Of Missing Out.

I helped them by leading a UX Design project to improve upon their onboarding flow and fix other ux related issues I found along the way.

The founders of the company are seeing a drop in their customer onboarding and retention during the sign up process.

I proctored a Google survey to get the lay of the land while reviewing user browser session videos, I understood and empathized with the issues people were facing by talking to Fomo's customer service specialist.

I also did competitive + comparative analysis, facilitated and performed user interviews along with usability studies to find out the missing piece of the puzzle and deliver my insights. 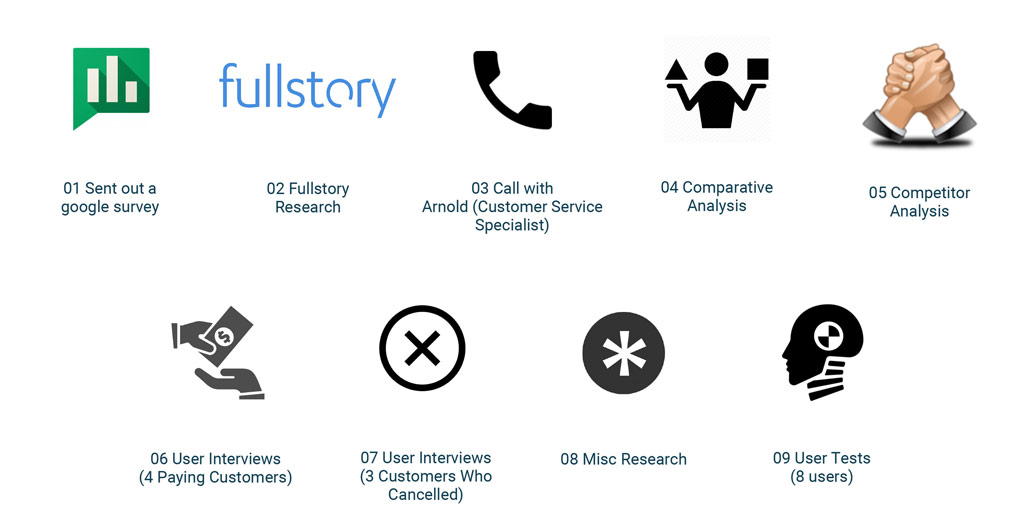 I followed the above process to not only understand the problem but also learn more about the company and the product because I was totally new to this field and type of work.

This was very important in order for me to empathize and connect with the people who are using this. Every step provided massive insights and the usability studies were done on their current staging platform. 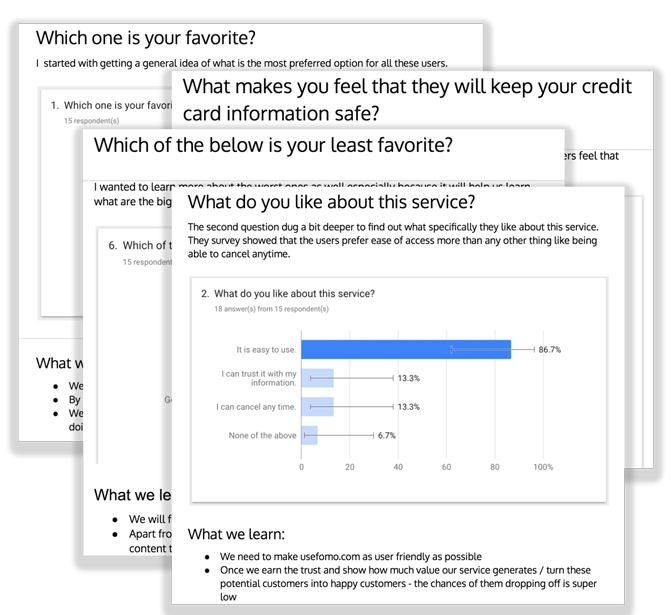 I had a theory that since Fomo was a new company offering a new product into this space, people don’t trust the brand enough for them to be able to provide their credit card details so I asked them questions about feeling safe and what their preferences were.

I compared several online platforms which provided an online service with a free trial by capturing people’s credit card. I dove into deep research and reading on what are the best practices for something like this:

--- do you capture the credit card information during the sign-up process of the free trial?

Side note: Netflix also goes ahead and sends people a reminder 3 days before the trial has expired - speak of confidence in their own product!

Ryan introduced me to this nifty tool which tracks and captures movements and activity of the users on websites.

Upon in-depth analysis of the reports generated and watching the videos, I concluded that that this tool was helpful and I definitely learned the what behind the problem we were facing but not the why.

This tool also confirmed that most of our user base was using Google Chrome desktop so we targeted our efforts to build the next iteration of their MVP for desktop.

Arnold is amazing at what he does! He is the Customer Support Specialist and talking to him was a critical part of this process especially since he has been directly interacting with our users so I tried to learn as much as I could from him.

Design is a collaborative process and I wanted to include everyone in the company and learn from them to understand what they have discovered so far and Arnold was the best person to start with.

He has been talking to the customers ever since the product launched and provided me with some deep insights into how the customers thought about Fomo and what they had to say about it. He also shared the most common issues people were facing amongst other things.

What surprised me the most was that people already loved and trusted Fomo. The ones that didn’t were either just testing it out without serious intent or they didn’t have proper tracking setup on their websites to show them the value Fomo was generating for them.

HERE’S WHAT I LEARNED:

In retrospect, it makes sense why integration was the main hurdle for most people since majority of our user base is coming from Shopify which automatically took care of integration of the code and their payments.

There was something wrong in the whole onboarding chain and I was determined to figure out what it was!

I started off with seeing our own User flow to see how exactly we are doing things and I compared it to other SaaC platforms which captured the credit card info during onboarding.

Compared to Fomo’s flow, Netflix’s flow is super simple, actually, way too simple and I later realized how they kept their flow narrow and simple to make it super easy for the user to onboard themselves.

The copy was on point and so was the messaging. I mentioned earlier how they clearly communicated when the user will be charged, how much they will be charged and they will send the user a notification 3 days before the trial expires. This was all targeted towards building trust and coming across as a non-shady brand and it definitely works! 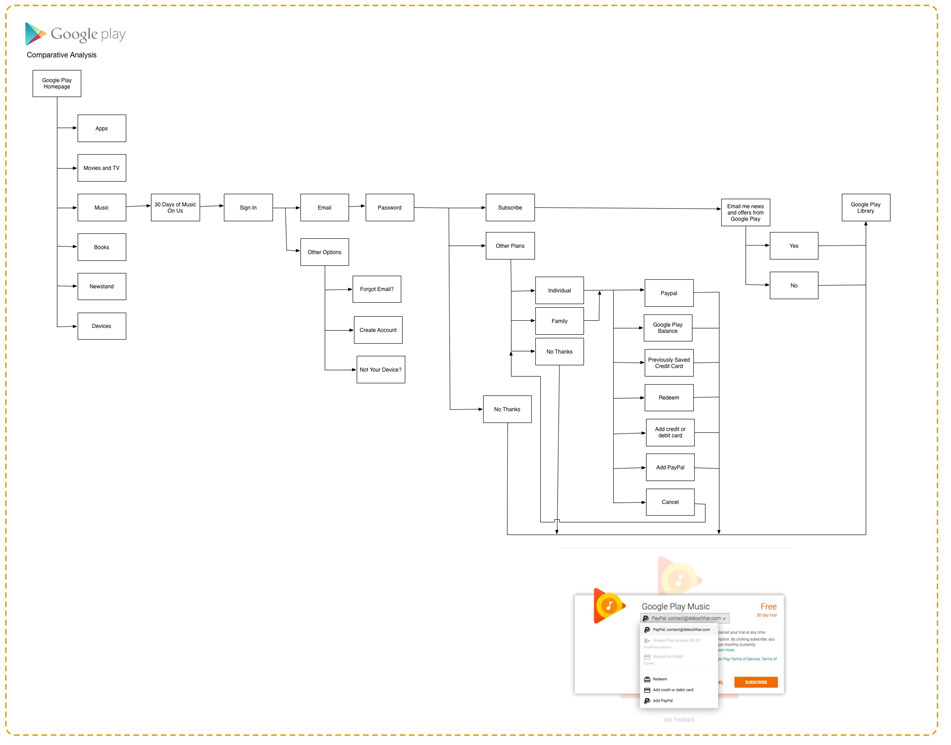 I did a similar process of the above, for a few competitors.

All the user flows suggested that I needed to reduce the options the user sees during the on boarding process and just keep the essentials to improve the overall UX but the research was not done, yet!

Ryan helped me find paying and the customers who cancelled. Majority of the them had signed up through Shopify confirming that there is something up with the credit card on boarding. 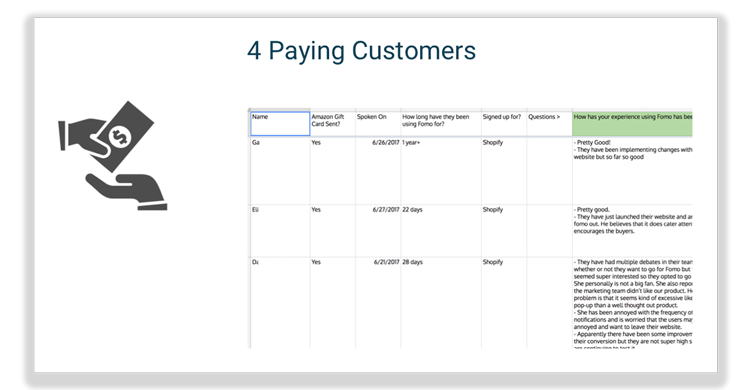 WHAT I LEARNED FROM PAYING CUSTOMERS: 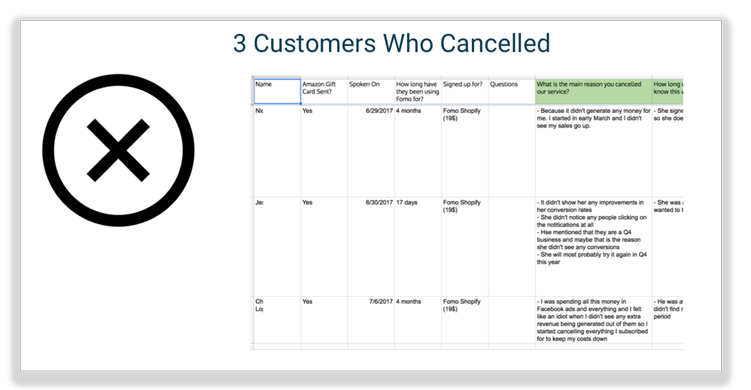 WHAT I LEARNED FROM CUSTOMERS WHO CANCELLED:

I also learned the importance of connecting Google Analytics and I might include it as a part of the main flow in future iterations based on performance of the product.

Both user groups were hungry to learn more about Fomo and Conversion Rate Optimization in general. They were looking for tutorial videos not only on our website but also on YouTube to make better use of this product. I informed Ryan about this immediately and suggested he start working on them immediately.

Along the way, I was reading various articles on how to effectively perform user onboarding without losing the user’s trust/interest, what the normal conventions are when it comes to using forms and sampling different credit card forms to see which one of the most effective.

I dug a bit more deeper into FullStory and noticed some bugs which Ryan and his team fixed immediately.

We were also receiving constant feedback via emails from our clients which Ryan was kind enough to forward me instantly. This informed my insights and recommendations I’d share at the end of the project.

I still wasn’t sure what the break in the whole chain is and was growing a bit frustrated for not having a strong hypothesis on why the current on boarding process was not working as effectively as it should and then I did the user tests which blew my mind away!

I tested Fomo’s staging website (which is exactly the same as the LIVE website) with 8 users and only 2 people were able to finish the simple task I gave them! Yes, 6 out of 8 users failed to finish the task, in fact, they were not even close to finishing the task. 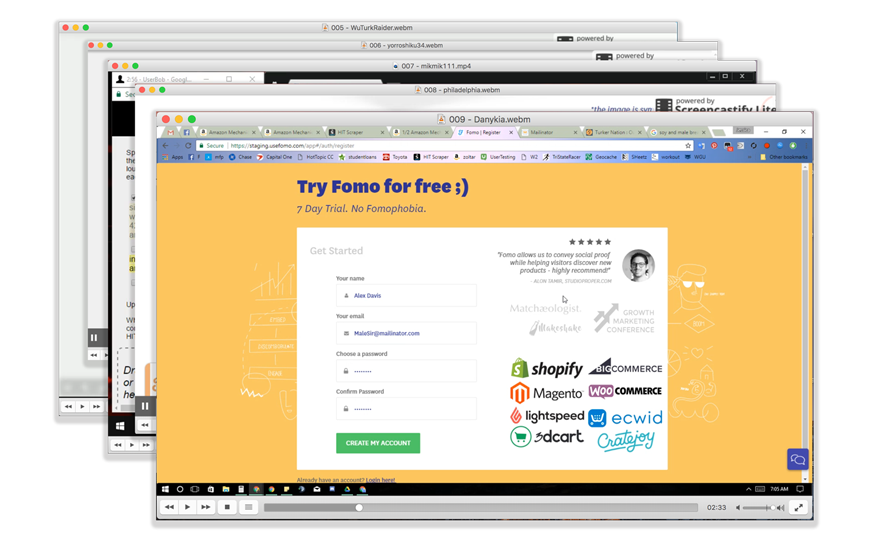 TASK DETAILS: (this is what the users were asked to read out loud to ensure they understood the basics):

Fomo is a service that, once installed on your website, shows notifications to the visitors on your website when someone buys something. You can later customize this code to trigger based on custom events. Pretend you have a website which sells products online. You heard about this new thing called Fomo which might help you improve your sales and you want to register and get the embed code to get it working for your website. 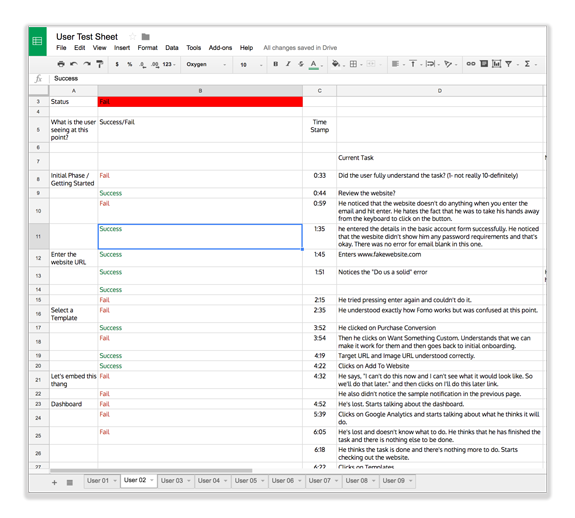 The main criteria for success was them to get the embed code and successfully sign up using the given credit card #.

I went through the videos multiple times and took notes on what the users were feeling, what they were thinking and saying out loud and what they were expecting based on timestamps in a separate Google Sheet.

This data was great but not enough to show my research findings to the rest of the team at Fomo so I overlayed the steps these users took in Omnigraffle over the userflow I shared above to show you how and when things went wrong.

These are the 2 users who were successful:

Here are the ones that did not make it:

and here's all of them! 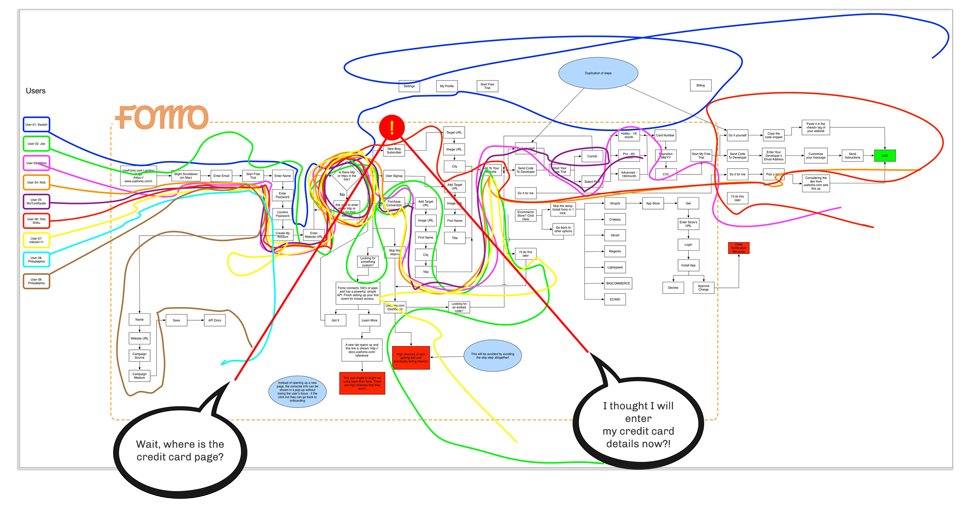 Based on these findings I was able to build a new user flow for Fomo.

Below are the changes I made:

Based on this, I created new wireframes which closely resembled their current visual design theme.

I considered creating the final prototype in InVision but since most of these changes were based on changing the flow and majority of the elements were already in place, I just delivered the wireframes along with a walkthrough video explaining all of my research and walking them through the wireframes. 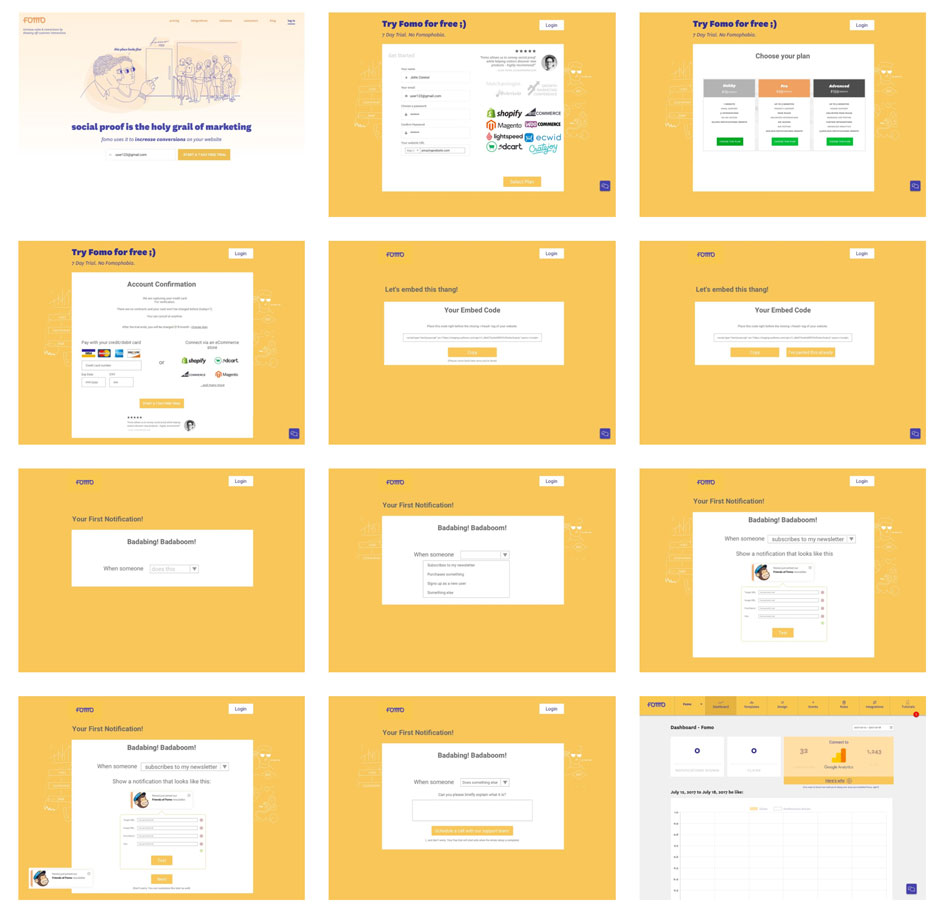 Ryan and his team will be implementing these insights to their website very soon and based on the results, we will decide what further changes need to be made.

there's a reason you don't see the word "widget" on our website. it's because Fomo has never been about a <div&…