This makes it a powerful tool for eCommerce entrepreneurs who want to boost traffic and win sales - a tool that you may be overlooking.

What makes Pinterest interesting is not just the size of its user base, but the way those users behave. People on Pinterest click on a lot of outbound links, meaning the site generates a disproportionate amount of social media referral traffic. According to a 2015 report, Pinterest generates 5% of all such referrals online. That’s second only to Facebook, and more than Twitter, Google+, Reddit, and LinkedIn combined.

Pinterest users are also more engaged than normal. As you're no doubt aware, content on social media often gets buried very quickly. Wise Metrics crunched the numbers and found that the average Tweet has a "half-life" - the time taken for a post to receive 50% of its potential clicks - of merely twenty-four minutes.

Finally, traffic from Pinterest is more likely to convert. Pinterest users aren't just there to catch up with their friends or get updates from the brands they already know - they use Pinterest to search for and compare new products. According to a survey by Millward Brown Digital:

And when Pinterest users make a purchase, the average order value is about $50 - higher than any other social network.

In other words, Pinterest is a potential goldmine of traffic, product discovery, and sales.

While often referred to as a "social network," Pinterest's CEO Ben Silbermann - who founded the company with two others in 2009 - rejects the label, preferring to call his creation a "catalog of ideas."

On Pinterest, users create "pinboards" - collections of content (mostly images) based on whatever theme tickles the user's fancy. Pinboards are usually public; if someone sees something they like on one of your pinboards, they can click 'Save’ to add it to one of their own.

One person might create a pinboard for their favourite recipes; another might save links to the books they want to read. People use Pinterest for anything from planning their weddings to saving interesting fashion ideas.

As a marketer, you win when people pin anything that might lead them to your products. This guide will teach you all the best strategies to make sure that that happens.

Next, you need to confirm that you're the real owner of your business's website. Follow Pinterest's instructions, and wait for them to approve your account. (It's often near-instantaneous, but sometimes it may take a little while.)

That's it! You're now ready to start pinning content.

You might also want to install the Pinterest save button on your own website. This will add a small button to every image on your site, allowing users to quickly pin images they like. The data suggest it's worth adding: a study by Shopify found that 2/3 of all Pins come from a business's website.

What can you pin? Thing about it from a user perspective. Someone isn’t going want to follow your buisness’s Pinterest account if they are seeing a bunch of boring product images against a white background. They are far more likely to save pins from curated boards which, of course, includes some well-curated product images.

Start by creating some boards on various themes that are relevant to your business. For example, if you sell guitars, you could have one pinboard for:

Alternatively, you could include boards on topics that you know your audience would be interested in. For example, if you sell baby carriages, it would make lots of sense to have a boards that appeal to busy moms, such as "quick recipes."

Check out how women’s vintage-style product eCommerce store IWISB includes a board on "Space Aesthetic," which includes pins from their products and lovely space images. 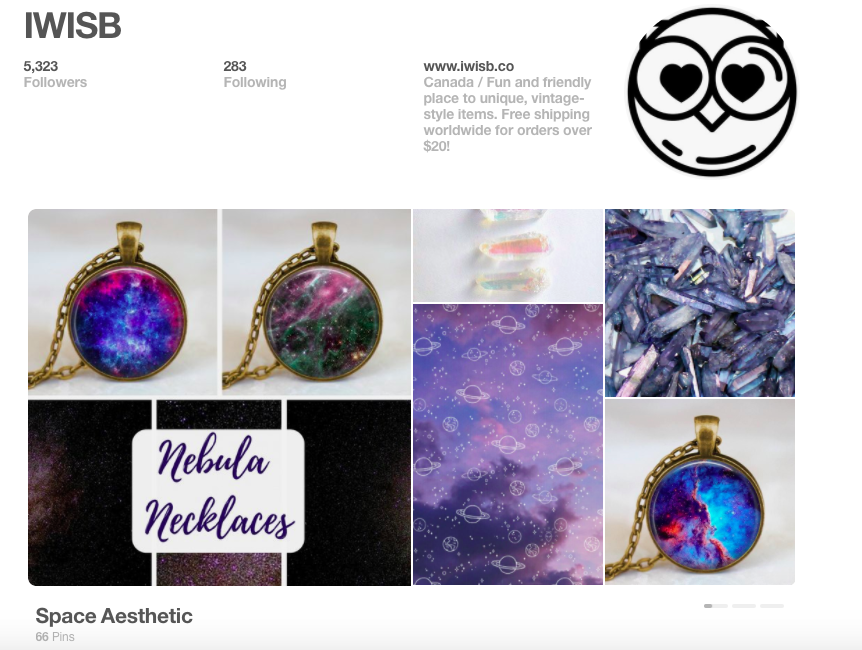 Create boards full of compelling content that's related to anything you do, you'll win followers - and some of those followers will check out your other boards and be driven indirectly to your products.

When you first create a pinboard, try to add at least 20-30 pins before making it public. As you fill it up, you can keep it "secret". Otherwise it will look like your board (or account) is inactive, and people won't pay much attention. 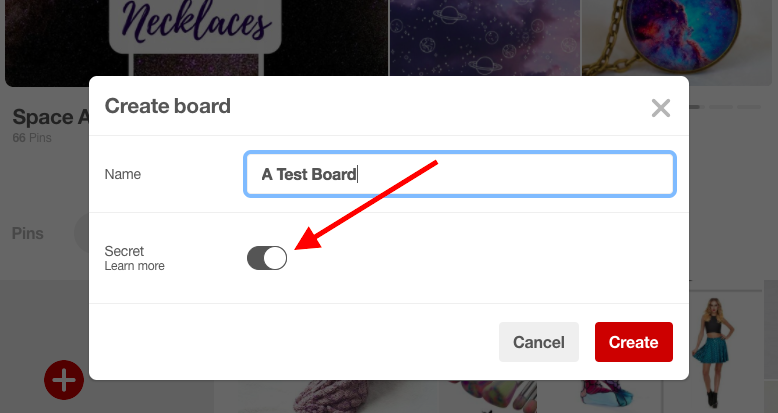 The first rule of being successful with selling over Pinterest is to pin regularly. You should aim to pin at least a few pins everyday, if not one every two hours. You can use an automated pinning service like Tailwind if you’d like to take some of the manual labor and planning out of it.

So where can you find interesting content to pin? The best way is to use Pinterest how it was intended: simply explore, and save the things that inspire you!

Search the site for terms related to your industry, products, and interests. If you see something you like, click Save to "re-pin" it to your board.

You can also upload your own images, or save links from around the web. The latter will be faster if you add Pinterest's "Save" button to your browser - here are the Chrome and Firefox versions.

You can have as many pinboards as you like, but it's best if you stick to a single, clearly-defined theme for each one. People follow boards because they're interested in the specific topic at hand. If you waste their time with content that isn't what they signed up for, they'll unfollow quickly. Use your analytics to create boards around the interests of your existing customer base. You can do this through Google Analytics, for example, which shows you many pieces of information related to your website’s traffic:

And of course, you'll want to pin your own products. Don't be shy - if your boards are interesting, entertaining, and fun, people will love them and they won't mind an occasional link to something you're selling.

With that being said, don't simply create a pin for every product you sell. Pinterest is not supposed to be your product catalog - that's what your own your own eCommerce site is for. Your goal on Pinterest should be to capture users' attention, then entice them to your real site for the full experience.

So here are a few tricks you can use to maximize the impact of your product pins:

1. Put Prices on Your Pins

"Rich Pins" are a special type of pin that display extra information about the content being shared. There are four kinds of Rich Pin: product, app, recipe and article.

When pinning a product, be sure to make it a "product pin". Among other things, this will display the product's price above its image: 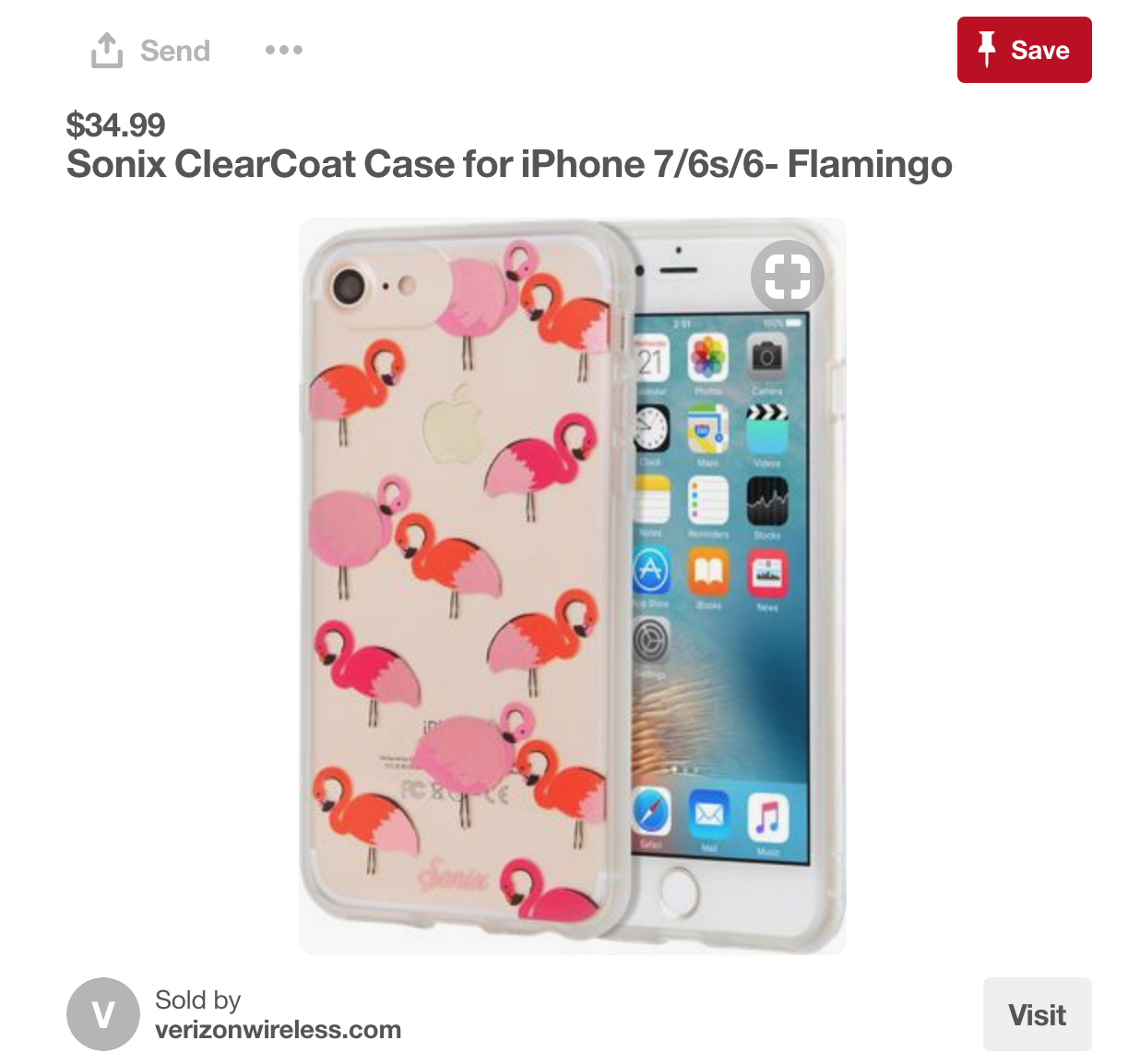 This might not seem like a big deal, but it turns out that pins with prices get 35% more likes than pins without. Make sure to include the prices of all your products when possible.

2. Don't Show Faces In Your Products

A few years ago the company Curalate analyzed a huge amount of Pinterest data to determine what makes a successful pin. After analyzing over 500,000 images, some of their findings were surprising.

Which pin do you think gets more shares on average: one with a human face, or one without? Curalate found that images without faces get on average 23% more repins than those with the human touch.

Some other interesting and potentially useful findings from Curalate's study were:

Like Facebook's "promoted posts" and Twitter's "promoted tweets," on Pinterest you can pay to boost the visibility of your pins.

Promoted Pins get repinned on average 11 times per advertisement. Each repin means that someone is sharing your ad with their own followers, who may in turn share it to theirs, further increasing impressions. According to Pinterest themselves, promoting a pin boosts its impressions by on average 30%.

Another nice thing is that unlike, say, a Google AdWord, a Promoted Pin stays online and visible after the paid campaign has ended. With the extra shares it's just received, this means a Promoted Pin will often continue to gain more impressions than normal even though you're no longer paying extra. Pinterest found that in the month after a Promoted Pin's campaign ends, it often receives 5% more impressions than a comparable month if it had never been promoted at all.

Whether Promoted Pins are right for you depends on your business and your budget, but they're definitely worth considering. Go here if you want to set them up.

It's nice when Pinterest users come to your store to buy something. But what if they don't have to?

If your eCommerce store is powered by Shopify, BigCommerce, or Demandware, you can connect your store to Pinterest to gain access to an exciting feature - Buyable Pins.

Buyable Pins are like the "product pins" described above, except the prices are displayed in blue rather than black: 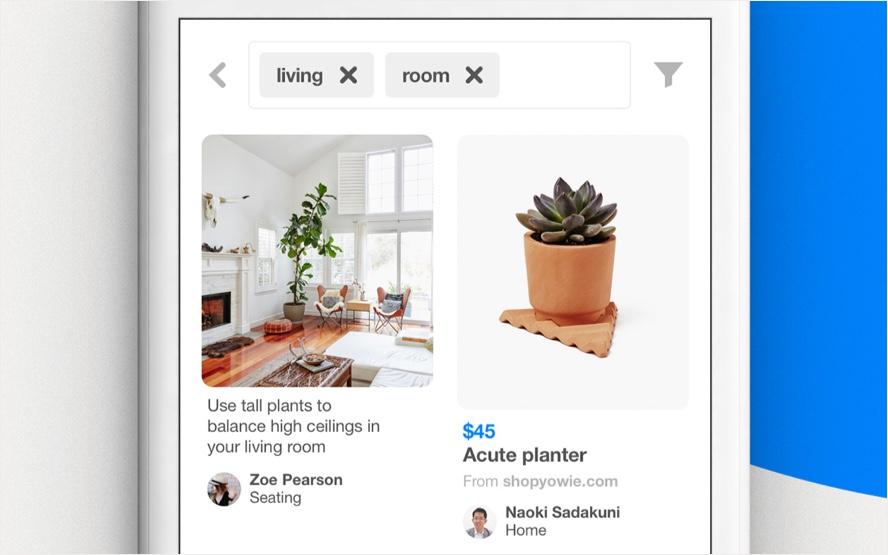 More importantly, if a user likes the look of Buyable Pin, they can buy the product directly from Pinterest, without having to visit your site at all! You're of course still responsible for shipping and customer service, but Pinterest will handle the payment themselves.

And the best thing about Buyable Pins? They're free! Pinterest doesn't take a cut. That may change in future... but for now, if you have the ability to use Buyable Pins, it's an absolute no-brainer to set them up.

See here for more information from Pinterest about Buyable Pins, or check out the instructions for setting them up on your platform:

Take your most popular products and, if you’re creatively inclined, head on to a service like Canva. If not, hire a graphic designer. Create long pins (optimum size of 735px by 1500px) featuring your product in a creative way, including some text to state the product name. Having a few of these pins for your most popular product will go a long way in increasing the amount pins they receive, as well as the amount of clickthrough they get. Check out the delightful long pins from Modcloth’s Pinterest board: 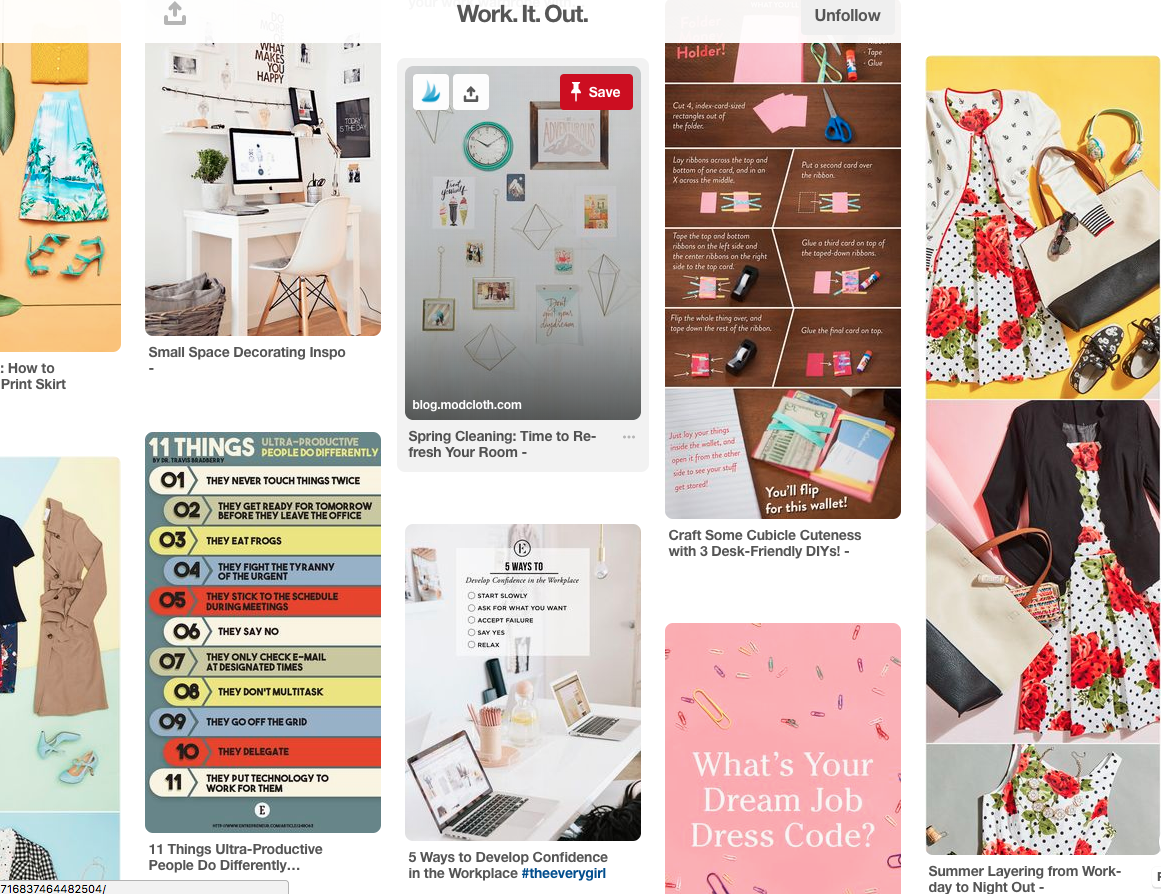 A group board is a board created by a specific Pinterest user who has allowed other people to contribute to the board. In some cases, these boards can have hundreds of thousands of followers and a few thousand contributors.

Being accepted to these boards and contributing to them can send your pins thousands of impressions. They are very powerful, and you should definitely read more about how to find and get into group boards in this great post here.

Pinterest is as of yet still under-tapped. There’s a lot of room to grow for eCommerce businesses in the right niches and who are willing to regularly put in the time to have a bit of fun pinning some cool images. Good pin to you!

Many, perhaps most, online businesses now offer "live chat" as a customer service option. Rather than calling or emailing with your support questions, live…